Welcome to the ultimate guide for fighting against Phoenix. The Forge of the Phoenix is a tier 16 map and Phoenix is one of the four guardians that you need to defeat to open the portal and take on Shaper in Shaper’s Realm.

The Phoenix is the guardian that does a mix of physical and fire damage. He is immune to knockback and freeze. As the battle goes on, your fire resistance will go down.

Melee Attack → A basic melee attack that deals Fire Damage and can Ignite.

Recommendation: This move is not too deadly, and can be tanked. Ranged players can make an effort to keep distance between the Phoenix to avoid this attack.

Whirling Charge → Locks onto a target, charges up, and spins to the targets original location dealing Fire damage multiple times throughout its path.

Recommendation: If you are melee, move to the back of the Phoenix when you see this move charge up. If you are ranged, move left or right from your current location.

Fire Bomb → The Phoenix stops where he is and brings his swords down into the ground. He first emits a debuff that temporarily reduces the player’s Fire Resistance by -50% (from uncapped resistance). He then begins to charge for 4 seconds and releases a large discharge that deals Fire Damage and can Ignite.

Recommendation: Move as far as possible from the Phoenix to avoid taking damage from this attack as it is extremely deadly.

For every 10% of life that the Boss losses, the following happen:

Resistance Debuff → The player’s maximum Fire Resistance is reduced by 1%, until the boss is killed. 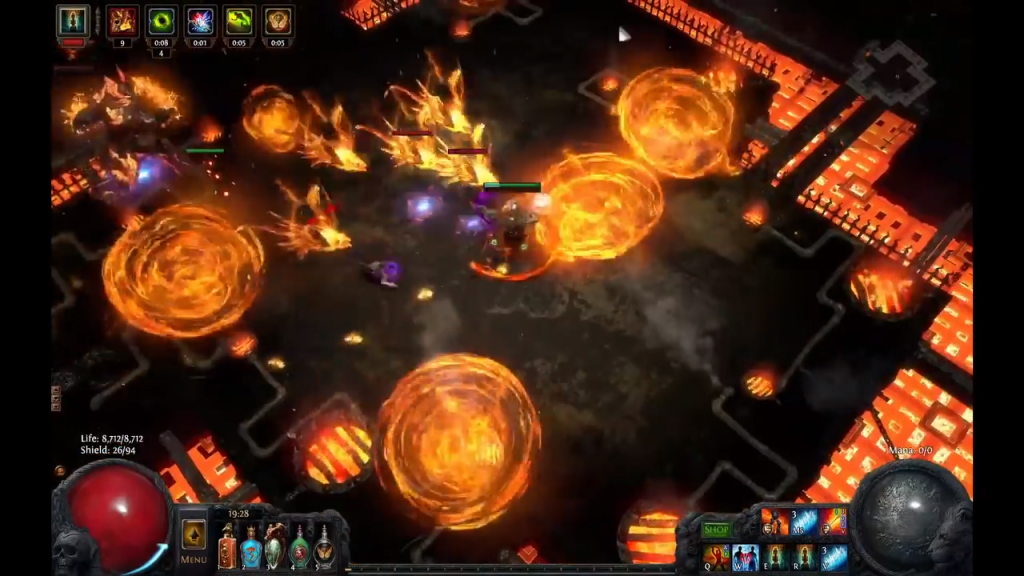 Add Spawn → A Phoenix that will shoot fire projectiles at the player. Phoenixes are revived a few seconds after they are killed.

Fire Spout → A Fire Spout that deals fire damage in a small AoE around it as it travels around the arena. Each spout lasts for a few seconds and is replaced by another spout. These can stun players with low stun thresholds very easily.

Preparing Against the Phoenix

To fight against the Phoenix, you will want to stack fire resistance and make sure its over 85%. If you have skills or items that increase max elemental resistance, it will further help reduce their damage.

Skills or Items for Defense 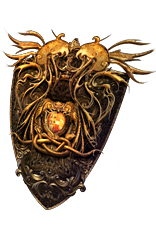 Loreweave – A great armor that has the important maximum resistance up to 80%.

Skills such as fortify and endurance also helps with some damage reduction. Some examples are: 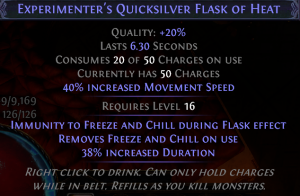 Quicksilver Flask – The prefixs don’t matter. However, if you can additional movement speed would really help as you can run quickly and avoid whirling charge attack. 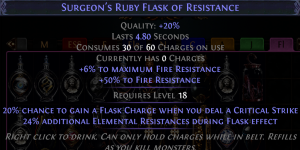 Ruby Flask – Further increases your maximum fire resistance by 6% as well as 50% fire resistance. With the Rise of the Phoenix Shield and Purity of Fire, you can get to 85% max fire resistance. You can now tank the firebomb if you have more than 7k health or 9k ES.

of Dousing-> Removes ignite and immunity to ignite/burn.

Since the Phoenix is physical damage/fire based, you will want to avoid stacking too much of the following affixes:

As a good rule of thumb, avoid stacking 2 or more damage mods to ensure you can finish the map just fine.

Before you entire the arena, open a portal so you can always come back to the fight if you die. 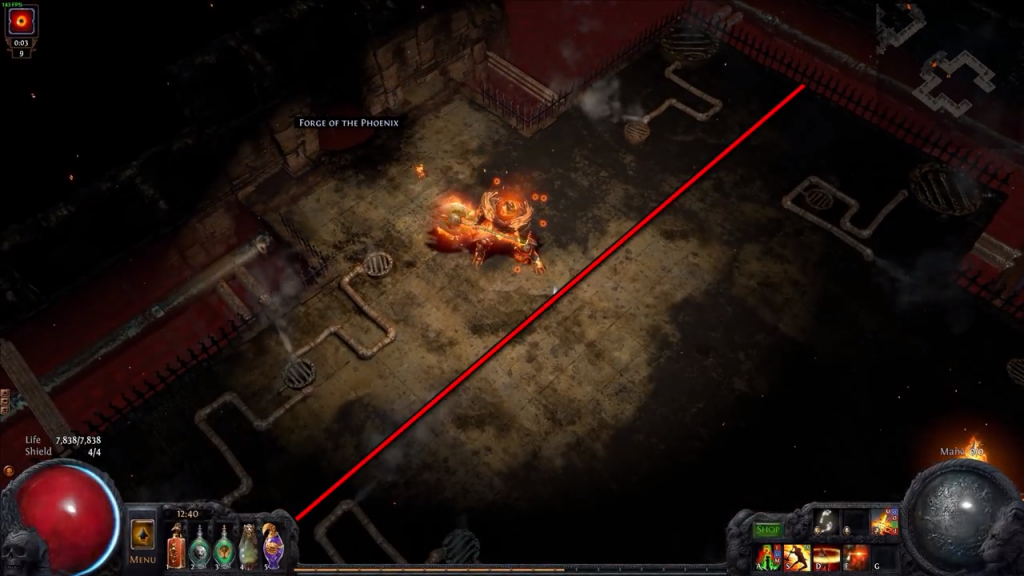 You have roughly 8-10 steps before you will trigger the fight. As you approach the Phoenix, he will immediately start off with whirling charge attack. Dodge it. If you are melee, make use of your movement skills like whirling blades or leap slam.

Right after the whirling charge attack, he will proceed to use firebomb attack. You will have plenty of time to dodge it by moving as far away as possible. However, this can get tricky if the mod “monsters have 100% increased area of effect”. This effectively doubles that area of effect of firebomb and you will definitely want to be off screen and away from him to make sure you don’t get blasted in the face.

During the early stages of the fight, it will be manageable in terms of dodging. When he starts dropping 10% health, each subsequent drop will reduce your fire resistance by 1%. That is why it is important to overcap it to at least 85%. As he drops to 50% health, more fire spouts and fire phoenixes will start spawning. The fire phoenixes will keep respawning when it is destroyed. The key is to destroy them when the Phoenix is charging up his fire bomb attack. If you let too many phoenixes spawn and attack you, it may overwhelm you, especially if you are not a tank build.

The fire spouse can get very annoying when they converge together. Run around and make sure to position yourself by not standing at corners where it traps you while the Phoenix is charging fire bomb in the center of the map.

Life steal builds are also excellent at sustaining your health. For builds that don’t rely on life steal, you will need to dodge, evade and play accordingly.

This fight is all about endurance and doing enough damage to kill him. The longer the battle goes on, the easier it is for you to make a mistake. I recommend 7k health or 9k ES to take him on. Make sure to overcap fire resistance at 85%.

Fragment of the Phoenix – This is a guaranteed drop upon Phoenixes death. This is used to help open Shaper’s Realm to take on Shaper. 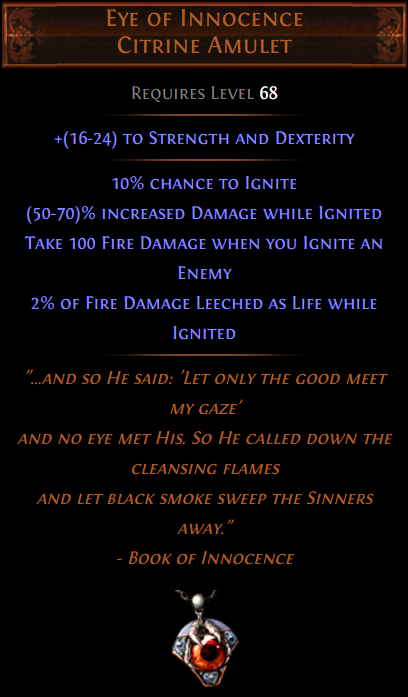 Eye of the Innocence – An amulet provides fire leech. Useful for some fire based builds.

Razor of the Seventh Sun – A 1 handed sword that can be used for niche fire builds. 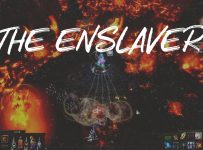 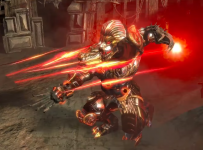 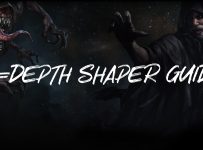