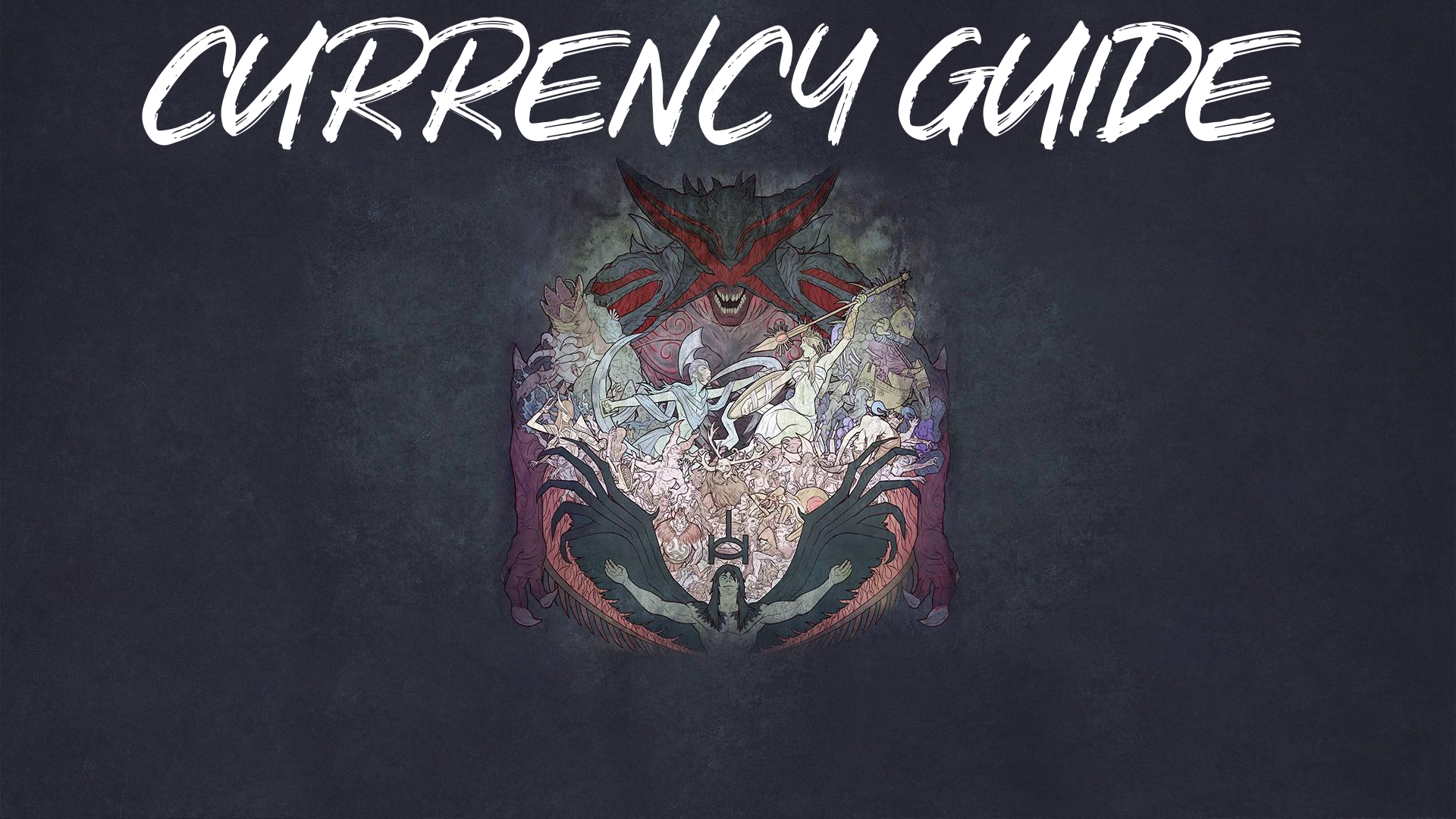 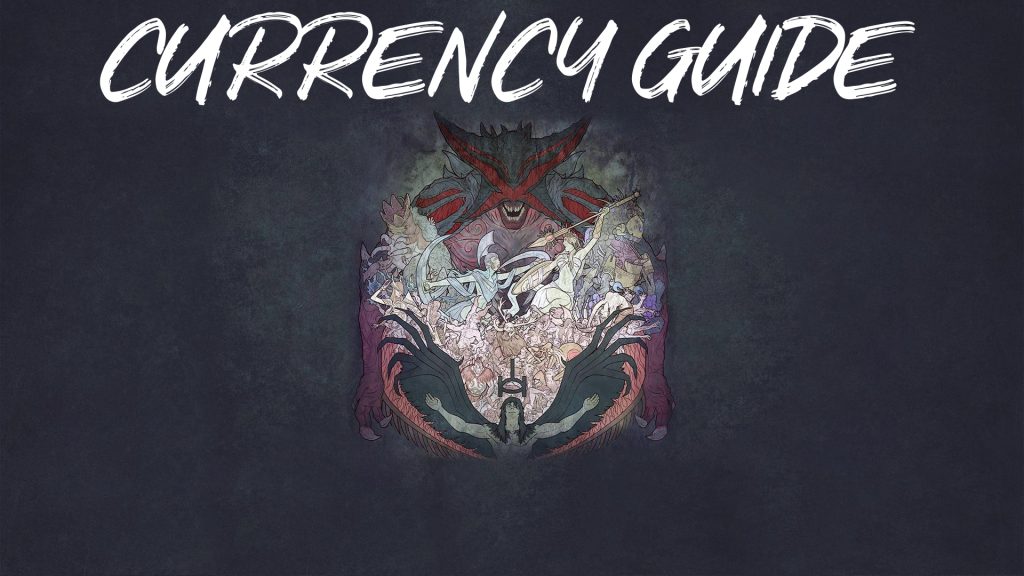 Hello and welcome to a guide for Path of Exile. Today I will explain and guide you on how to earn currency. Unlike any Role-Playing game (RPGs), Path of Exile doesn’t has an actual “currency system” – For example, it doesn’t has any gold, money, in-game cash or any sort. Due to this particular reason, orbs has been made into a reliable source of currency to trade, sell and buy items.

The most commonly used currency in Path of Exile is Chaos Orbs and Exalted Orbs.

Why is Currency Important in Path of Exile?

Technically, it’s not THAT important. My meaning is, you don’t have to intentionally farm currency just to progress. There are many beginner-friendly and budget viable builds out there that can carry your character to late game bosses. Currency will come as you progress into the game, you do not have to worry too much about it but there are many method to earn currency that you might miss in the game.

Why should I earn Currency then?

First of all, the most fun builds out there requires currency to purchase their core items to make the build works. Best-in-Slot, high defense items that has high HP & resistance and high DPS items can be expensive. Basically, currency is everything, you can buy any items with with it, craft a really powerful weapon or armor with it, 6-linking an item, you name it. 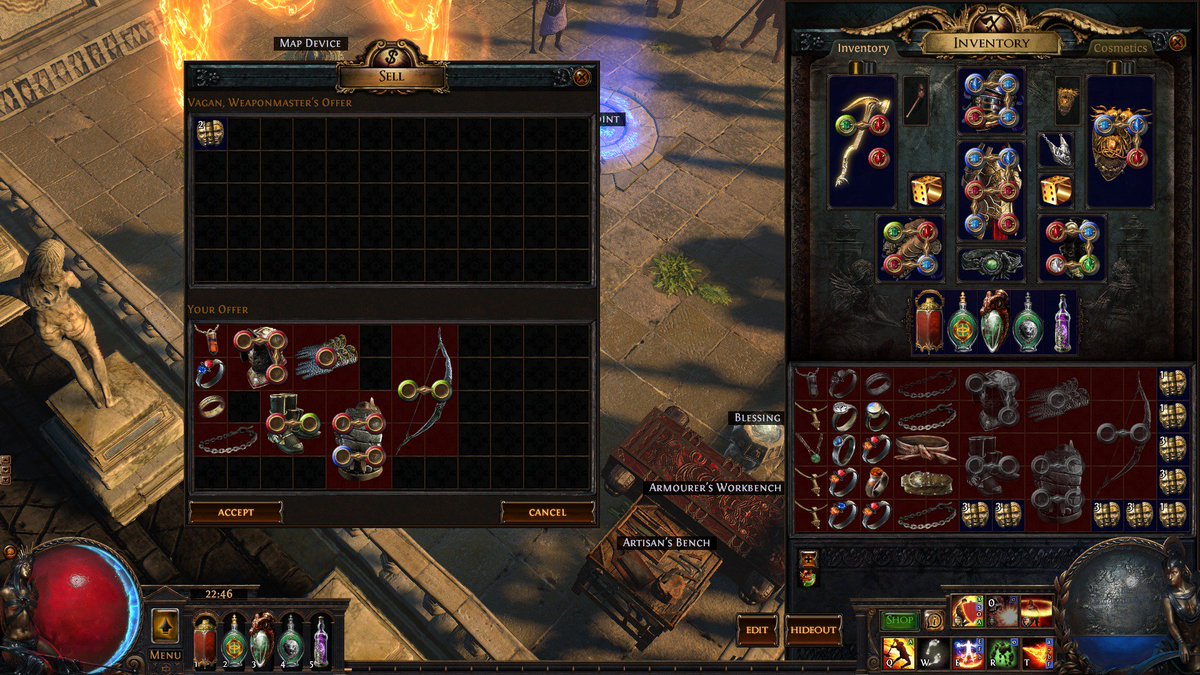 The 2 Chaos Orbs recipe requires a full item set of a character which includes: Helmets, Body Armors, Gloves, Boots, Belts, Amulets and two Rings. The item level of each item has to be in between lvl 60-74. Any item level lower than 60 will not complete the recipe. If there are any item that are above lv 74, the result of the trade would be 2 Regal Orbs instead of 2 Chaos Orbs. Chaos Orbs are usually more valuable and needed in most Leagues.

This method is recommended when you are leveling, progressing and gearing up. It is not really recommended if you are high level and has good gears. It is better for you to grind higher tier maps for better loots. If you find yourself too weak and in need of better gears, this is a good way to do it. This can be done by any trading NPCs/Vendors. 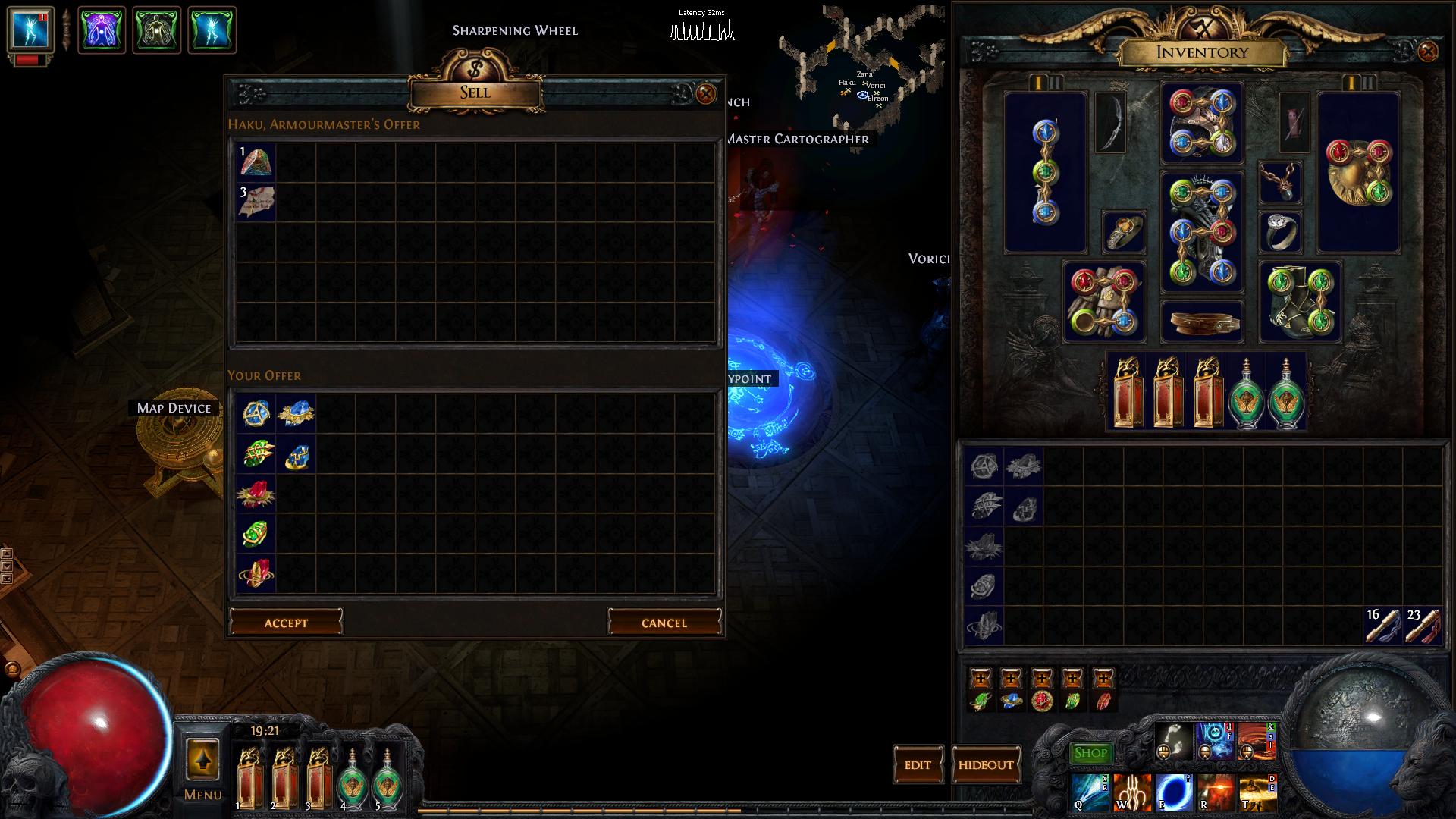 This recipe is not as effective as the Chaos Orb ones but you can use your useless quality gems to get some Gemcutter’s Prism (GCPs). Keep an eye out, some quality gems might worth a few chaos, especially the ones above 15% quality. Meanwhile, some unused gems can be worth nothing so feel free to trade them for the Gemcutter’s Prism.

The recipe requires a total of 40% quality summed up from your quality gems. For example, you have a 20% Blink Arrow and 20% Abyssal Cry, that is a total of 40%. This can be done by any trading NPCs/Vendors.

Buying low price item and reselling them is something you can do. In my own personal opinion, I think it’s a waste of time unless you found some really low price but valuable items. By the time you used to trade/buy/sell, you might have an Exalted Orb drop by using that time to farm maps instead. Who knows? The drops are RNG.

Selling a fully 6-socketed item to a vendor gives you a total of 7 Jeweller’s Orb. 6-socketed can be found only from lv 50 or higher item levels. Bows, Two-Handed weapons and Body Armors can be 6-socketed. They can be found commonly in maps, keep an eye out for them. 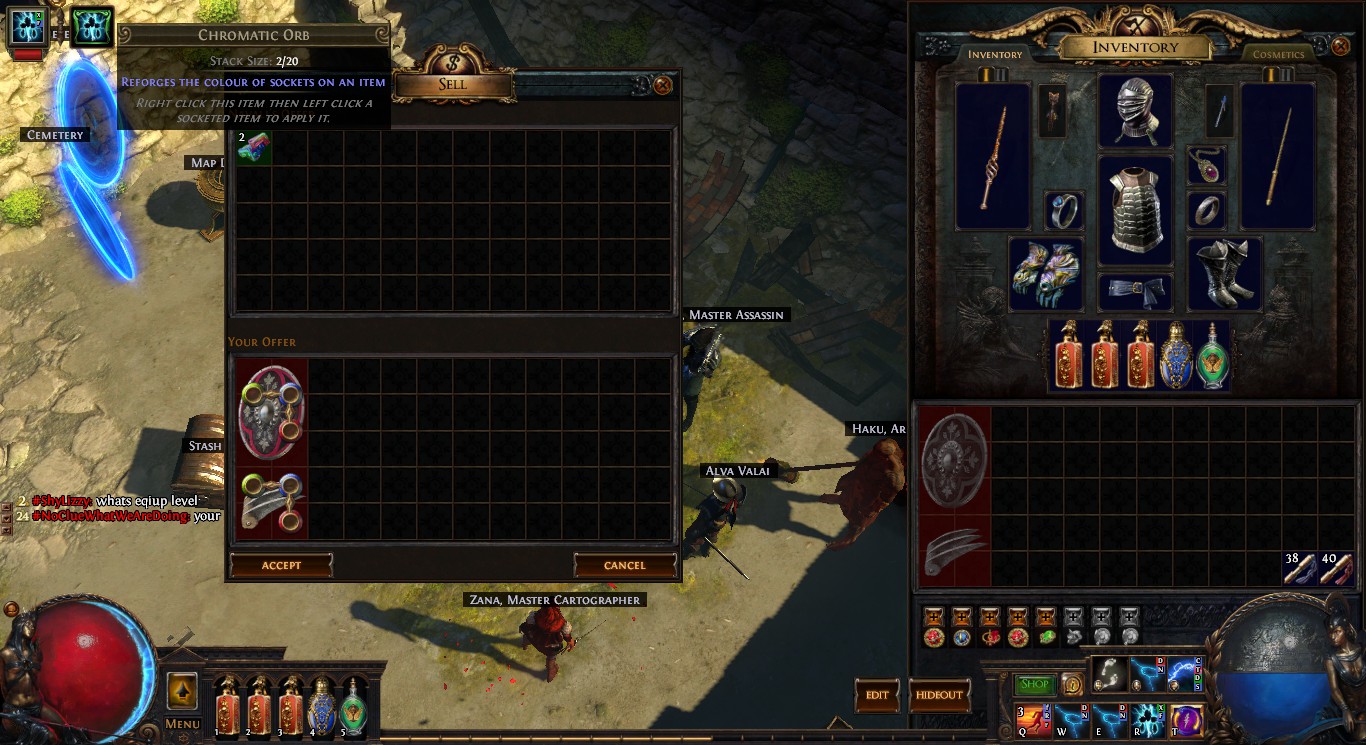 Like most currency items, Chromatic Orbs can be dropped by slain monsters, chests, and destructible containers.

Chromatic Orbs can also be obtained by vendoring an item with one socket of each colour (red, green, blue) linked together. This is one of the most common ways to obtain Chromatic Orbs. In particular this means you can get some Chromatic Orbs cheaply (typically for about one Orb of Transmutation each, or less) by buying such linked items from the Vendors.

Feel free to pick up any Rare/Yellow items in game whenever you found them. Who knows, sometimes it might surprise you when you identify them, it might be something really good – especially the high item level ones. If they are not useful, sell them to any vendor/NPCs in town or hideout. They give a plenty of Orb of Alterations.

Also, remember to always identify the Rare/Yellow items before you sell them. Otherwise, the trading result wouldn’t be Orb fo Alteration but instead, Orb of Transmutation which worth a lot lesser. 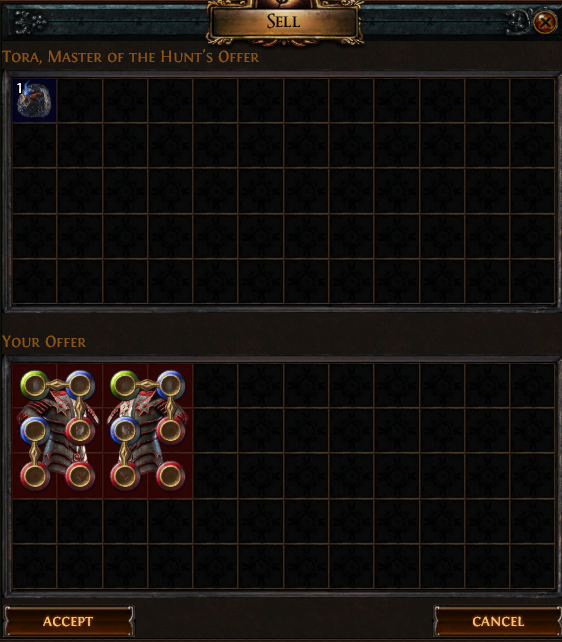 Orbs of Chance are common currency items that can be dropped by slain monsters, chests, and destructible containers. There are several recipes for Orb of Chance but they are not worth the time to do so. If you are interested, here it is anyway.

Orbs of Chance can also be obtained from the following vendor recipes:

x2 Orb of Chance – Full rare set with lowest item level between 1 and 59, all unidentified OR all 20% quality

x3 Orb of Chance – Full rare set with lowest item level between 1 and 59, all unidentified AND all 20% quality

I wouldn’t recommend anyone to focus on this at all, Orb of Chance are way too common. Farming them wouldn’t be efficient at all.

This method has been commonly used by most players to test their luck in game. Sometimes you could get really lucky and get rich in just one second. The chances are really low, so if you are not a fan of RNG, feel free to sell your Orb of Chance for Chaos Orb.

Another thing I should mention, only use the Orb of Chance on a based item that has valuable unique version of it such as Shavronne’s Wrapping (Occultist’s Vestment) and Kaom’s Heart (Glorious Plate). 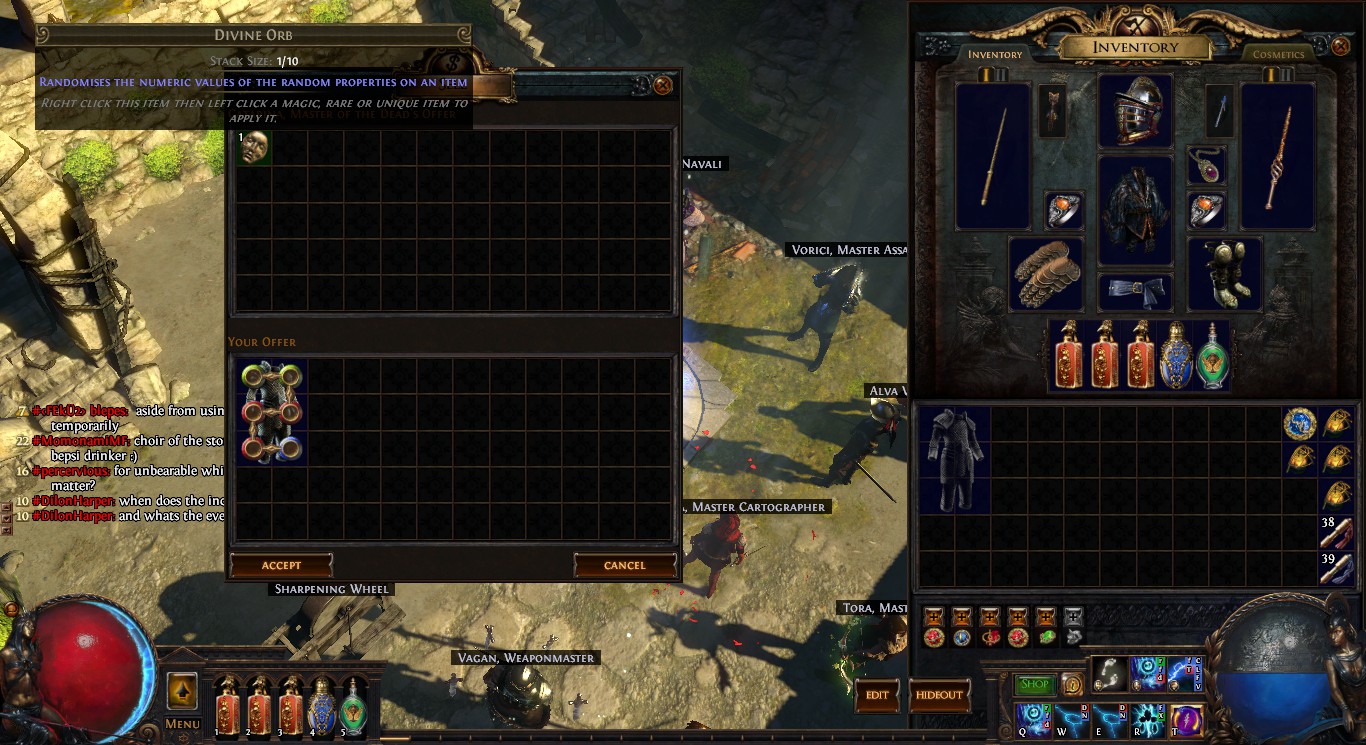 Divine Orb is quite a valuable currency in the game. It costs several Chaos Orbs depending on the league/season and market price. The recipe of a Divine Orb is to sell a fully six-linked item to a vendor or NPC.

It is only worth to do so only if that particular body armor is corrupted and has bad stats or gem slot colors. Weapons are usually not worth to keep especially if it’s a corrupted with bad DPS.

Personally, I think the in-game Trade channels are bunch of scams and overpriced items. Do not waste your time trying to purchase or sell any items in the trade channel. It is not worth the hassle or time. You’ve been warned.

Where you should do your trades then? PoE.Trade

PoE.Trade is a website that you can use to buy or sell your items or orbs. The result after you searched a specific item will always comes the cheapest ones first. PoE.Trade is a very reliable 3rd-party trade website, it is very convenient, quick and safe.

There is two method to set up PoE.Trade, fast and simple.

You can get valuable items just by running maps, especially the higher tier level maps. Equipments that has item level of 84-86 can be valuable depending on their base. You can even craft those items yourself if you like, and sell it for even higher price. Although, that might cost you a lot of currency if you are unlucky.

As a beginner, I wouldn’t recommend doing so. Crafting can be frustrating and stressful especially you lost all your currency and got nothing useful out of it.

Other than equipments, you can get maps, orbs, uniques, etc. that you can obtain.

Since map tier changes from time to time, here are some maps that are quite popular.

You don’t want to play a really slow build to farm currency. You want a build that is really fast, good damage with good clearing speed to speed up your farming progress.

Which build should I choose?! Well, it’s up to you. Here’s a good place you can look for builds – The PoE Forum.

Ideally, look for one that is budget-friendly that has good clear speed. You don’t want to spend tons of currency for a farming build just to farm those currency you’ve spend on it.

Don’t pick up everything that drops

Focus on picking up items that are going to be sold for a reasonable amount of value. Picking up low-valued items aren’t worth the time or effort. Technically, you can fill up your inventory with pretty much everything that drops and sell them but don’t head back in to pick up, sell, repeat unless they are valuable. This only applies to mid-late game, not for beginners that has nothing to start with.

For example, it’s worth to pick up yellow/rares to sell for Orb of Alterations in the beginning of the game. But when you hit a certain point of the game and you realized you don’t need anymore of those orbs, you can stop picking them up. The time used to pick up and sell can be used to keep farming and slaughtering every monsters.

Try not to focus on farming

You would get bored easily if you focused too much on farming. Farming is all about RNG, it may drop in a minute or an hour. It may not even drop for the next 24 hours. Nobody knows. It wouldn’t be fun if you are expecting “x” amount of currency farmed by today, you are just going to be disappointed and lose the motivation to continue playing.

Pick a fun and fast build, enjoy how fast you could slaughter the mobs and watch how cool your skill performs. Think of the next fun build that you are going to spend your currency on.

Some other stuff you can sell

For checking the currency prices at a glance, try out PoE Ninja.

Using loot filter helps the player by removing the useless/junk loot from the table. It enhances the sight of valuable items and even has a special sound whenever a valuable item or orb drops. Saves the player a lot of time. Easy to set up and it is not against the rules. Here’s a guide.

I use the default version and it works fine for me. If you want to make a custom filter, check out the video below. 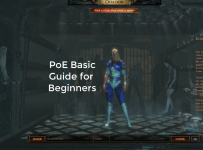